President Dave Wohlfeil and Chief Mark Wohlfeil welcome you to our new website...

The West Falls Volunteer Fire Company, Inc. is a not for profit corporation staffed by 100% volunteers.  Many of whom belong to this community, and are your neighbors, and friends.  We have Women, Men, and Junior Firefighters and EMT's.  We operate within the Aurora-Colden Fire District # 6, Erie County, New York.

The West Falls Fire Company was founded in 1919 to provide Fire Protection, Emergency Medical Services, Rescue and Fire Safety Education for the residents and businesses of West Falls and our surrounding communities.  We often cooperate with mutual aid service with Colden, South Wales, Hill Crest and East Aurora when there is a need.

Our apparatus includes 3 Engines, an Ambulance, Rescue Truck with Trailer which carries 3 Special Rescue ATV's, and our Rope Rescue gear, and Chief’s Vehicles.

Aurora-Colden District # 6 residents are never charged for our Ambulance service, as we rely solely on Donations from the public to operate our Company.

Exec. Board Members At Large:

ACFD # 6 Board of Fire Commissioners 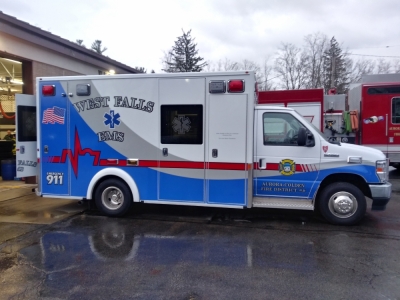 This site has been viewed 8,697 times.
News
Events
Pictures
Apparatus
Maintained by the members and staff of WEST FALLS FIRE COMPANY. Designated trademarks and brands are the property of their respective owners. Copyright © 2006-2023. YourFirstDue Inc. All Rights Reserved. Content on this web site is supplied by WEST FALLS FIRE COMPANY. YourFirstDue Inc. cannot be held responsible or liable for any content, text, pictures, or any other media found on this web site.
Management login
Powered by